“I was surprised and delighted, of course, when the writers of the movie ‘Star Trek’ with Chris Pine and Zachary Quinto said in several interviews that my book Best Destiny has inspired the plot. I developed the character of George Kirk, as requested by my editor at Pocket, for the book Final Frontier, then carried him on to Best Destiny, which was James Kirk’s first adventure in deep space. Having James Kirk be a juvenile delinquent was also my development, and was inspired by a tall ship experience I had on a ship full of adjudicated teenagers, in a program then called Vision Quest.

Imagine my surprise when I watched the sequel to ‘Star Trek,’ which is ‘Star Trek: Into Darkness.’ I was again surprised when the plot of my first Trek book, Dreadnought!, was used as the core plot for the new movie. The writers very honorably showcased the line about “This new Dreadnought-class starship,” spoken by the power-mad admiral who built a huge war vessel and was determined to start a war with the Klingons because he believed it was inevitable, and that’s the plot of my book. I’m very flattered and glad I can continue inspiring new Star Trek adventures.” 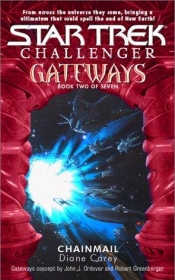 (2001) Scattered through the galaxy are Gateways capable of transporting matter and energy across unfathomable distances. Their rediscovered secrets could change the future of space travel forever...the trouble is that noone knows what waits on the other side. 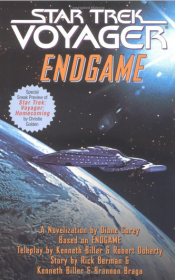 (2001) For seven tumultuous years, the U.S.S. Voyager™ has explored the Delta Quadrant, encountering strange alien civilizations and bizarre space-time anomalies as it steadfastly made its way back toward the safety of Federation space. Captain Kathryn Janeway and her heroic crew have faced all manner of harrowing danger and hostile life-forms while never losing sight of their ultimate goal: home. 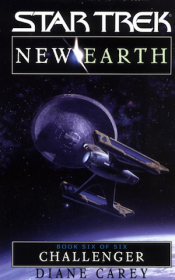 (2000) Far from the reaches of the Federation, the "Starship Enterprise(TM) " has been guiding the development of a once obscure planet upon whose fate the future of the galaxy may now depend. The "Enterprise" has been the sole representative of the Federation, fighting a constant battle to protect the colonists from enemy aliens... 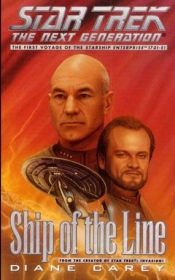 (1999) "Ship Of The Line" tells the story of the first voyage of the "U.S.S Enterprise(TM) " NCi1701-E, under the command of Morgan Bateson. Captain Bateson, a man from the 23rd century now living in the 24th, sees what no one else can see: that the Klingon Empire is building its forces and preparing to strike against the Federation. 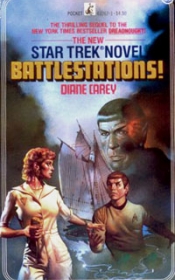 (1999) Back on Earth enjoying a well-deserved shore leave, Captain Kirk is rudely accosted by a trio of Starfleet security guards. It seems he is wanted for questioning in connection with the theft of transwarp -- the Federation's newest, most advanced propulsion system. 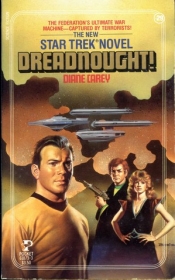 (1999) On the eve of her maiden voyage, Star Empire is stolen by terrorists who demand a rendezvous with the Starship Enterprise™ -- and with Lieutenant Piper, stationed aboard Kirk's ship on her first training cruise. Now Piper must discover why her friends from Starfleet are among the terrorists... 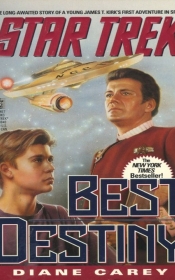 (1999) As James T. Kirk prepares to retire from a long and illustrious Starfleet career, events in a distant part of the Federation draw him back to a part of the galaxy he had last visited as a young man -- a mysterious world called Faramond whose name takes Kirk on a journey back to his youth. 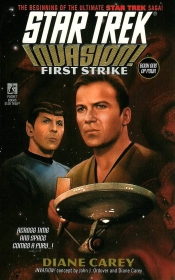 (1996) Captain Kirk is stunned when the Federation receives an urgent plea for help -- from the Klingon Empire. A mysterious starship has invaded Klingon space and resisted all their efforts to destroy it. Establishing contact with the stranger's ship, Kirk discovers that it is only the vanguard of a vast alien fleet obsessed with conquering the Klingons... 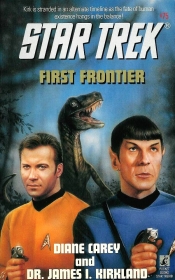 (1995) While testing a new shielding device, the "U.S.S. Enterprise" TM is caught in the middle of a Klingon/Romulan battle. The "Enterprise" crew rescues a lifepod, and they are confronted by a Klingon who claims to know nothing of human existence. Convinced the Klingon is telling the truth, Captain Kirk hurries to Starfleet Headquarters in search of answers. 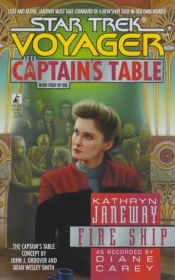 (1989) While testing a new shielding device, the "U.S.S. Enterprise" TM is caught in the middle of a Klingon/Romulan battle. The "Enterprise" crew rescues a lifepod, and they are confronted by a Klingon who claims to know nothing of human existence. Convinced the Klingon is telling the truth, Captain Kirk hurries to Starfleet Headquarters in search of answers. 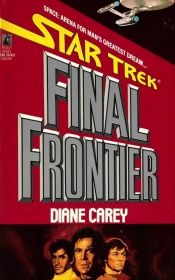 (1989) Commander George Samuel Kirk was aboard the Enterprise under the command of Captain Robert April before his famous son was born. Starfleet has just been founded and the Enterprise has just been built, and is sent on its first mission. The mission takes the Enterprise into the heart of hostile Romulan territory, where cosmopolitical machinations and advanced weapons technology will decide the fate of a hundred innocent worlds. 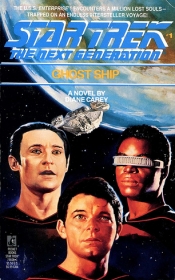 (1988) In 1995, a Russian aircraft carrier is destroyed by a mysterious creature that just as mysteriously disappears thereafter. Three hundred years later, Counsellor Deanna Troi awakens in her quarters from a nightmare in which she senses the voices of the crew of that Russian ship, whose life-essences were somehow absorbed by the creature that destroyed them.